Green tea benefits have been widely touted for centuries. This is because, as the least processed tea, yet the one that is the richest in antioxidants, the green tea benefits to overall health are astonishing. As one of the most popular tea varieties in the world, its potency is well-documented and its praise well-deserved. 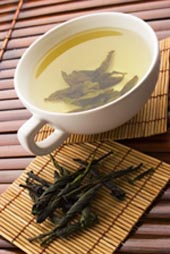 All real tea varieties, including green teas, come from the Camellia sinensis plant. Usually brewed from packaged or loose leaves, green tea can also be found in supplemental extracts. In all of these forms it is free of calories, while other green tea benefits include:

When comparing the nutritional benefits of different tea varieties, matcha green tea tends to stand out most for its high catechin polyphenol content, which is responsible for the elevated antioxidant activity in tea. This is perhaps due to its unique cultivating in which it is protected with a heavy cloth for several weeks prior to its May harvest. This covering allows shoots to grow larger, but thinner leaves, which also increases the flavor and texture of matcha green tea.

By providing a high level of antioxidant protection, green tea benefits to good health are as follows:

Green tea benefits to good health also make it useful in preventing or treating a variety of different cancers, such as:

Independent laboratory studies reveal that green tea benefits may actually serve to slow the production of cancerous cells, which may account for its overall effectiveness against this deadly disease.

Consuming one to two cups of green tea per day is considered to be a completely safe practice for adults. However, for those taking supplemental extracts containing highly concentrated levels of green tea, liver damage may occur. Symptoms of liver problems may include:

When taken in large doses, green tea may interfere with the effectiveness of anticoagulant drugs. Anyone who is on warfarin, or a similar anticoagulant, is advised to discuss the use of green tea in natural cures and home remedies with their health care provider first.

Many diet companies advertise some form of green tea fat burner supplements. While limited studies do support green tea as a fat burner, along with exercise and other dietary changes, it is best to consume green tea in natural forms, instead of supplements, in order to get the full nutritional and health benefits it offers. Occasionally, green tea side effects are discussed, which often stem from green tea supplements or extracts.

Of the many types of tea, (which include white, black and red varieties), green tea is believed to be the most beneficial to good health. While herbal teas are often sold alongside other tea varieties, consumers should be aware that these are not real tea, but are actually herbal infusions made by other plants. While some may contain antioxidants and other nutritional benefits, they will not offer the same health-promoting green tea benefits.