Anise, also known as sweet cumin or aniseed, is a close relative of the carrot, dill, cilantro, cumin and fennel as it is also a member of the Umbelliferae family. Having been cultivated for more than 2,000 years, it is heavily lauded for its ability to heal many illnesses and disorders. Anise has been widely used for centuries from ancient Greece until the present. 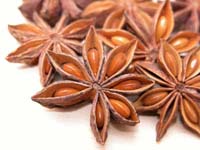 Anise is a native plant in several North African, Mediterranean and Asian countries that is currently grown for commercial trade. As an annual, it grows up to two feet tall and produces feathery leaves that bloom yellow flowers. In warm weather, anise seeds ripen before being harvested and dried.

Anise tastes like licorice. Its seeds can be added to boiling water before being strained and the concoction sweetened with glycerin and honey helping to form a syrup. It can then be administered as an expectorant cough syrup and even taken daily for help in boosting memory.

Seeds can also be crushed to produce an oil that can be added to hot water and more seeds before being consumed as a tea. Anise’s oil can also be mixed with pure honey and taken orally.

Ancient Greeks and Romans regularly used anise as a seasoning and a healing herb as it was believed to aid in digestion and nausea. Ancient Romans even believed that anise was an aphrodisiac.

Currently, anise is enjoyed for adding flavor to soups, salads, dressings, sauces and as a popular garnish. Its seeds are used to flavor curry powders and a variety of other condiments. Anise oil is used as flavoring in licorice, as a popular flavoring in beverages and to mask the unpleasant taste of pharmaceutical drugs. Both the seeds and the oil are used in the manufacturing of cosmetic fragrances, soaps and other toiletries.

Anise has also been used for the treatment of:

Anise oil is also recommended to reduce the amount of drooling common in some sclerosis patients.

Anise is safe to use as a seasoning while pregnant, but should be avoided for any type of health treatment at that time. Anise’s essential oil can cause nausea in high doses, as well as vomiting.

For use as natural cures and home remedies, herbs like anise can be extremely useful in home cures. As most are safe to use for common folk remedies, some herbs may not interact well with prescription or over the counter medications. Therefore, caution should be used and a medical doctor consulted for anyone under a physician’s care before starting a new herbal regiment.

It is also advised that a professional herbalist be consulted before beginning a new herbal treatment plan.